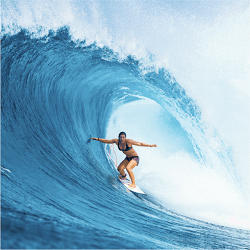 Twenty-two-year-old Australian surfer Tyler Wright has won her maiden World Surfing title at the Roxy Pro in France on Thursday. After defeating Tatiana Weston-Webb in her semi-final, Wright had to wait for the last seconds of the second semi-final before she could celebrate. The only other competitor in the running for the title was the American Courtney Conlogue. After winning her own semi-final, Wright waited with bated breath as Conlogue faced off against three-time world champ Carissa Moore.

As the final seconds of the second semi-final ran out, Conlogue had not done enough to topple Moore. With the scores being announced over the loudspeaker, Wright raised her arms in triumph as the new World Surfing title holder. In the final, she went on to lose to Moore, but it didn’t matter as she competed as the World Champ. Speaking about her win, Wright said that a lot went into the title, a lot of hours and a lot of fun. Despite not winning the final, her previous four wins put in the running for World Camp going into the competition.

Triumph Over a Tough Year

Tyler’s breakthrough victory rounds off a difficult year for the young surfer. Earlier in the year, her brother Owen, also an avid surfer, suffered a serious brain injury while competing in an event. His long and very public recovery added to the emotional pressure of having to perform at her best. Speaking to the press, Tyler’s father Rob said that she had played a major role in helping Owen to recover, sleeping by his bedside the whole time.

To add to this, Wright was dealing with the death of her uncle to whom she promised she’d one day win a world title.

Former world surfing champ, Layne Beachley has praised Wright’s win saying that she displayed nerves of steel, focus and composure in the water.

As the semi-final scores were read out, six-time world champion Australia’s Stephanie Gilmore ran over to give Wright a hug, clearly showing her approval of the win. The win puts Wright on the list with Beachley, Gilmore, Wendy Botha, Chelsea Georgeson, Pauline Menczer, Pam Burridge and Phyllis O’Donnell as woman who have all risen to the top of the surfing world.

Meanwhile, Wright has returned home to a hero’s welcome. The newly crowned surfing champion beamed with pride as the entire Wright family and a number of friends and fans greeted her at Sydney airport, each wearing one of her competition vests.