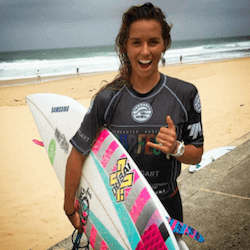 Half the surfers in the Top 10 of the 2017 WSL Women’s Championship Tour are Australians, although Keeley Andrew in 10th and Nikki Van Dijk in eighth are unlikely to fight their way into the Top 3 in the year’s final event in Hawaii. Nevertheless, they’re outperforming their male counterparts, who’ve only managed three Top 10 spots in the Men’s Championship.

So while online sports betting fans are waiting for the men’s final showdown at the Billabong Pipeline Masters, set to start in Oahu on 8 December, they can enjoy the action in the finals of the women’s tour at the Maui Women’s Pro in Honalua from 25 November. Theoretically, there are five women who could clinch the championship with a win in Hawaii, so it promises intense betting options.

A quirk in the WSL World Championship scoring means that although points are awarded all the way down to 13th place in a round, with a win netting 10,000, competitors get to discard their lowest two finishes in the 10-round tournament and be assessed only on their best eight. In practice, this leaves several permutations open, depending how the Top 5 finish in Maui.

Aussie Stephanie Gilmour, a three-time winner of the Maui Women’s Pro, is currently lying fifth on 45.150 on the ladder, 7.750 behind No. 1 Sally Fitzgibbons. But she hasn’t won at Honalua since 2009, and she’s offered at $41.00 in outright betting to win the championship. So even if she wins on Maui, she’ll need disasters from the Top 3 to finish the year among the medals.

Hawaii’s Carissa Moore, lying fourth with 47.300, is in a similar position, at $34.00 in outright futures. However, she’s surfing her home waters in Round 10, and she’s made it to the Maui final every year in the past three years, so she might be a good bet for this event, even if she doesn’t unseat the leaders.

The USA’s Courtney Conlogue is lying third on 50.000 and is at $5.00 to take the championship outright. Aussies occupy the top two slots: defending champion Tyler Wright on 51.200, at $2.50 outright, and favourite Sally Fitzgibbons on 52.900, at $2.00. If any of the three win in Hawaii, they will take the championship.