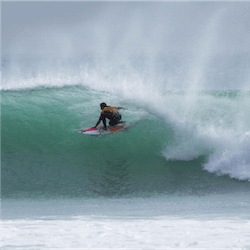 Surfing has only become a global sport in the past century, taking off on the US mainland via California in the early 1900s. International professional surfing only began in 1975, but by then the sport was already well established as an amateur discipline by then in places like Australia, South Africa, Brazil and many others.

Hawaiians, on the other hand, like many Polynesian cultures, have been surfing for centuries. In fact, the first people to surf California’s waves, bringing the sport to mainland North America in 1885, were three Hawaiian princes on vacation from their San Mateo boarding school, who rode their longboards off Santa Cruz.

So it’s entirely fitting that the finals of the WSL World Championships are held in the archipelago. Oahu hosts the final men’s tournament in the 2017 Tour at world-renowned Banzai Pipeline, and the WSL Women’s Championship ends at Honolua Bay in the Maui Women’s Open. You can get your bets in online at Luxbet to see if you can back the winner of this years event.

Why Hawaii Has Such Consistent Surf

That’s because large open stretches of ocean promote the formation of both wind and swell, the two ingredients that make up good surfing waves, and archipelagos tend to funnel both so that they move faster, which makes even more reliable waves.

Hawaii is geographically blessed, as the island chain runs on a generally northwest to southeast line, placing it athwart both the prevailing winds and the prevailing swells. This means that when surf is flat at one side of an island, it is often pumping on the other side, due to those funnelling effects.

As One Beach Closes, Another Opens

For much of the year, particularly in the northern summer, tradewinds blow over and around the islands from the northeast quadrant, while the prevailing swells are generated by southern winter storms far away in the South Pacific. On Maui, this results in great surfing on the southern and western beaches.

From October to March, however, the winds generally blow from the south and southwest, while the swell is generated by northern winter storms from the northwest. That’s when Maui’s eastern and northern beaches, like Honolua Bay, are at their most reliable for big waves.

Like so much else, ensuring a successful WSL Women’s Championship final at the Maui Women’s Open is really a matter of timing.