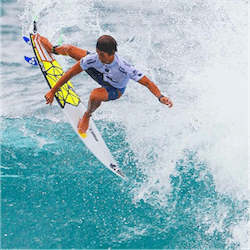 The 2017 Quiksilver Pro France is due to run from 7-18 October in the towns of Hossegor, Seignosse and Capbreton on France’s Atlantic coast. It’s the ninth of 11 World Surf League events on the 2017 Men’s Championship Tour, and with the top five surfers on the championship ladder separated by 10,000 points, it’s one that Australian online betting fans won’t want to miss.

Hawaiian star John John Florence, the defending 2016 WSL Men’s Champion, leads the outright betting currently, with most sites offering him at around $6.00. The 24-year-old, who has been surfing since the age of five, has won one Tour event this year already: the Drug Aware Margaret River Pro in Western Australia in March/April. He’s currently second on the tournament ladder on 43,400 points, behind South African Jordy Smith on 45,850.

Smith is the second-favourite to win the Quiksilver Pro France, with odds starting at $8.00. He also tasted success in a Tour event in Australia earlier this year, winning the Rip Curl Pro Bells Beach in Victoria in April. Along with one second, a third, three fifths, a ninth and a 13th on the 2017 Tour so far, he’s done enough to get to the top of the ladder, but he needs three more solid performances to stay there.

There are three Australians who will be fighting hard to unseat Smith and Florence in France. Julian Wilson, Matt Wilkinson and Owen Wright are on 37,200, 36,450, and 35,850 points respectively, so all three could advance on the ladder if they do well in the final three events of the 2017 Tour. All three have also won one event so far this year. Wright and Wilson are being offered at $11.00 to win the Quiksilver Pro France, with Wilkinson less fancied at $23.00.

Mick Fanning is another Aussie surfer who might surprise, despite being 14th on the ladder without a win yet this year. He’s joint third-favourite for the Quiksilver Pro France, at $9.00, along with Brazilian Gabriel Medina.

Medina’s countryman Felipe Toledo is the only surfer to have taken two victories to date on the 2017 Men’s Championship Tour, winning the Corona Open J-Bay in South Africa in July, and the Hurley Pro at Trestles in California earlier this month. He’s also reckoned to have a shot in France, at $11.00.