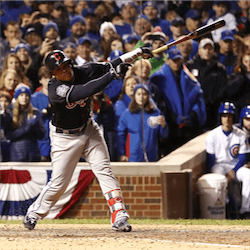 The regular season in Major League Baseball ends next Sunday, 01 October, at which point baseball fans around the world gear up for the playoffs and the USA’s two championships, in the American League and the National League. The AL champions will then face the NL champions in the 2017 World Series.

Most teams still have a bit of work to do before that best-of-seven jewel in baseball’s crown is even a possibility, however. At the time of writing, only five teams had secured their places in the playoffs by taking unassailable winning positions on their division ladders: NL West’s Los Angeles Dodgers, AL Central’s Cleveland Indians, AL West’s Houston Astros, NL East’s Washington Nationals and AL East’s Boston Red Sox.

The Chicago Cubs are currently atop the NL Central ladder with a win-loss record of 84-67. However, the Milwaukee Brewers are rights behind them on 81-71, and the St Louis Cardinals are hot on their heels with 79-72. All three teams have several games in the final week-and-a-bit of the season, so those positions could still shift.

Apart from the three division winners in each league, two wild cards per league get to go through to the League Championship playoffs as well. This is where it gets interesting for punters trying to pick a World Series winner early. The Indians, Astros and Red Sox are secure in the AL playoffs, and the New York Yankees, with a record of 85-67, look assured of a wild card.

But the Minnesota Twins are on 78-74, the Los Angeles Angels are on 76-75, and the Kansas City Royals, Seattle Mariners and Tampa Bay Rays are all on 74 wins and 77, 78 and 78 losses respectively. Even the Baltimore Orioles, with 73-80, could turn it around and snatch the second AL wild card by 01 October.

The standings aren’t as close on the NL ladder, despite the uncertainty in NL Central. The Dodgers and the Nationals are in the playoffs, and one team from the Cubs, Brewers or Cardinals will take the other spot. The remaining two of those teams will be locked in a battle with the Colorado Rockies for the final NL wild card, as it looks like the Arizona Diamondbacks, on 88-65, are assured of the first one.