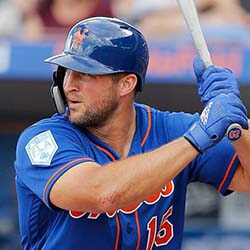 A limited spring training roster has cleared the way for outfielder Tim Tebow to have another shot at making the 2021 roster of the New York Mets.

The NY Mets announced on the weekend that the 33-year-old is one of a special group of non-roster players to have been invited to join their camp in Port St Lucie, Florida. Tebow is reportedly one of 26 non-roster invitees. Also on the receiving end of special invites were infielders Ronny Maurico and Brett Baty, pitcher Matthew Allen, catcher Francisco Alvarez and star outfielder Pete Crow-Armstrong.

The former Heisman Trophy winner first signed with the Mets back in 2016 but has yet to be selected to play in any of the big leagues. He was invited to join spring training in 2020 but did not make it into the Mets’ 60-player pool that time round. In fact, Tebow was invited to major league training camp by the Mets each of the past four years in a row. During his time with the team he has hit .223 with 18 home runs and 107 RBIs in a total of 287 games played.

Team president Sandy Alderson revealed in November that he was willing to retain Tebow on the roster for a little while longer, but that at some point the quest would have to come to a close. Tebow last fall told reporters that there remained several “other endeavours” he wanted to pursue, but that at the time, major league baseball was something that remained strong in his heart.