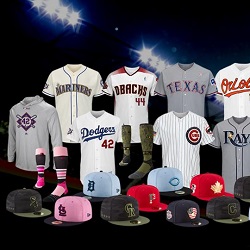 Major League Baseball has unveiled the designs for the uniforms players will be wearing for the special events this year. In the league’s official release the uniforms’ exact details are viewable, but a quick summary for these includes:

On Jackie Robinson Day all the MLB players and field personnel will don the number 42. There will also be a commemorative patch included on the caps, the jersey sleeves, and the socks.

In honour of moms everywhere, the MLB uniforms will feature pink socks and hats on Mother’s Day, although the jerseys won’t be much different, except for a pink ribbon displayed on players’ chests.

Father’s Day will look a lot like Mother’s Day, except for a blue accent colour instead of pink.

Independence Day will outfit the players in caps featuring stars and stripes and jerseys displaying a red, white, and blue team logo with socks to match. The exception is the Toronto Blue Days. They will be wearing their red alternate jerseys, with red hats sporting maple leaves on Canada Day, July 1st.

There is an interesting detail on the inside brim of the US teams’ hats this year, which is linked to the Constitution’s preamble, We the people. Although this doesn’t have anything to do with the signing of the Declaration of Independence, which is what the 4th of July is actually about, it still looks cool!