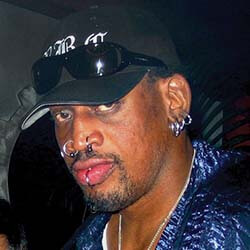 NBA legend Dennis Rodman was in the twang with police on Monday after he refused to put on a mast during a flight between Los Angeles and Fort Lauderdale, Florida. Rodman was reportedly admonished four times by JetBlue staff over his failure to wear a mask, and was greeted by US police upon touching down at his destination.

According to witnesses, the 60-year-old had initially obliged to the request to put on a mask, but only until airline staff walked away, after which he would pull his mask down to below his chin. Rodman reportedly later claimed that the mask had hindered his breathing.

Upon his arrival in Florida, Rodman was apparently met by members of the Broward County Sheriff’s Office. He was set free without citation after a cooperative discussion.

But this had not been the first run-in with authorities for Rodman over health and safety restrictions. In September last year, the former NBA great was caught on video hugging fans at a California Whole Foods outlet in Tustin. His mask was well below his chin on that occasion too.

But it hasn’t all been reprimanding and bad news for the famous ballplayer. In fact, he’ll soon be seen starring in 48 Hours in Vegas, a film set to be based on his famous Sin City adventure taken during the NBA finals in 1998. Film giant Lionsgate acquired the rights to the film in August.

Rodman will act as the executive producer of the film.