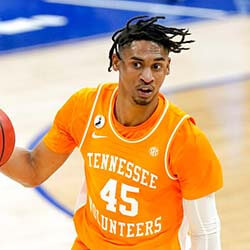 NBA prospect Keon Johnson from Tennessee has shattered a 20-year-old Combine record by averaging 11.3 points, 3.5 rebounds, and 2.5 assists – all within 27 games. He then entered the daft with hopes of being a first-round pick.

With his record, he had hopes of beating the 2001 vertical jump record set by Kenny Gregory. Johnson then went ahead and completely and utterly destroyed it. Gregory’s record was 45.5 inches (115.5cm). Johnson went on to beat it with his 48 inch (122cm) attempt. Unfortunately, this record didn’t work in Gregory’s favour and he was never drafted into the NBA. Johnson, however, expects to have a different future and has hopes of being picked during the early stages of the draft.

Currently, the player is believed to be on track to be drafted for the Golden State Warriors with pick seven while another draft bard sees him going to the Sacramento Kings in the ninth pick. Most draft boards have predicted that he will go into the top 14 picks. While his new record has certainly gotten a lot of attention, it’s his athletic performance that has him in the sights of the NBA. This is where he differs from previous record-holder Gregory.

Whether he is drafted or not, social media is abuzz with his latest record and it has been gaining a lot of traction. As players and teams prepare for the draft following the picking order, it’s anyone’s guess as to who will end up drafting Johnson and when.