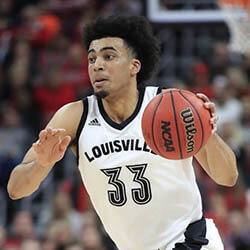 Jordan Nwora, the small forward and star of the Louisville Cardinals, recently revealed that he’s received a death threat after he underperformed in a game his team ended up losing to the Kentucky Wildcats.

The preseason lead-scorer for the Cardinals, Nwora only managed eight points in the December 28, 2019, game, a season-low for him. He shot only 2 of 10 from the field and, although he came onto the court as an 80% free throw shooter, he made just 3 of 6, with some of the shots he missed happening late in a neck-and-neck game.

He’s made a great comeback though, matching a career-high 32 points in a match the Cardinals lost to the Florida Gators on Saturday the 4th of January. He then scored 19 points and snatched 13 rebounds in the game his team played against the Miami Heat on Tuesday the 7th. This is also where the Cardinals’ losing streak came to an end, with them making 74 points to the Heat’s 58.

Talking to the press after the victory, Nwora stated that he’d seen some truly strange things in discussions about him online after the loss in Kentucky. He said that someone messaged him saying they wanted to kill him because they’d lost a US$15 bet thanks to the defeat. He commented that if that’s the kind of issue someone’s worrying about they have much more important matters to address. Nwora ended up laughing it off, but this is the kind of thing that is raising concerns over college sports being available for legal sports betting at all.