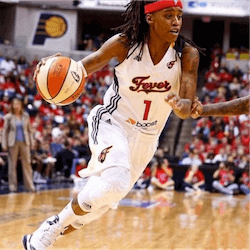 Tiffany Mitchell’s three put Indiana Fever up a point with 8:02 minutes of lay left in the second. The Sparks, however, immediately turned it over on their next trip as a result of miscommunications between Candace Parker and Alana Beard. The Sparks seized the opportunity immediately and took the quarter under control with a run of 11 to 0.

During this span Candace Parker managed to block two shots, and Nneka Ogwumike and Riquana Williams both slipped away with a steal, which saw Indiana Fever turn it over once more. Jantel Lavender and Nneka Ogwumike both went on to get hold of easy scores, by cutting to the net, and Sydney Weise hit a three from the left corner off an extra-pass delivered on-target by Chelsea Gray.

The 2nd game for this season for Natalie Achonwa was versus the Los Angeles Sparks. In the last contest, Achonwa ended up putting 7 points and 5 boards up in 24 minutes, and she managed a similar line on Monday, managing 6 points and 8 boards in only 21 minutes. This demonstration by Achonwa is well worth watching. It begs the question; can her performance help Indiana Fever’s line of defence? And is she capable of handling a few more post-ups in upcoming games?

All Eyes Were on Jantel Lavender

Jantel Lavender’s line on Monday was composed of 3 assists and 5 points inside a playing time of 19 minutes. She really personified the buzz around the continuity of the Sparks and the Lynx during her game.

Jantel Lavender is probably most famous for her destructive shooting kept close to the elbows, but she has been exploring with the three lately, as well. Monday’s game showed that she is able to quickly recognise when to deliver a hard dive to the rim and maintain her seal on the lane’s middle. Her performance was brilliant as far as defensive play was concerned, and she also was able to foresee a number of movements by Wheeler and Mitchell very accurately.

Everybody knows that Wheeler is a fan of snaking a pick and roll: she comes off of the screen and then crosses back over to the centre when the big is giving her too much of a cushion. Lavender correctly anticipated Wheeler’s cross, however, which resulted in Wheeler bumping into her instead of managing the play.

The final tally for the Los Angeles Sparks was 84 to 62 points for Indiana Fever.