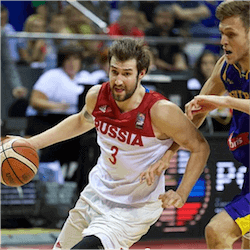 Defending champions Spain are top seeds in Group C, and also the favourites at online sports betting site to win the tournament, at odds of $1.10-$1.60. They face Montenegro in Romania on Friday, along with Hungary v Croatia and Romania v Czech Republic.

Spain are odds-on at less than $0.15 to beat Montenegro, with Czech Republic even more heavily fancied against their hosts. At a return of four cents on the dollar, however, Croatia is the team bookies reckon is the dead cert on Friday and you can back them at Luxbet if you’re keen to place a wager.

Playing their group matches in Istanbul, Group D also gets their EuroBasket going only on Friday. The match between Russia and their Turkish hosts is probably going to be the most evenly matched of the day, with the Russians at $2.00 and Turkey at around $0.50.

France and Greece Group A Contenders

At the time of writing, teams in Groups A and B were about to start their first matches of FIBA EuroBasket 2017, in Finland and Israel, respectively. France, offered at below $0.20, looked likely to beat their Group A hosts, with Finland at $6.00, and the French team is also third-favourite to win the tournament.

But Greece is also a strong Group A contender, despite the loss of NBA star Giannis Antentokounmpo to injury. They were at less than $0.10 to beat a $14.50 Iceland on Thursday, with Slovenia also odds-on to beat Poland in the third Group A clash.

The highlight of the opening Group B matches in Tel Aviv will most likely be between Georgia and Lithuania. Georgia are the $2.50 underdogs, while Lithuania are $0.40 favourites to win Thursday’s game, as well as fourth in the overall betting to become tournament champions. The Germany-Ukraine match looks set to go Germany’s way, and Italy are narrow favourites to beat hosts Israel.