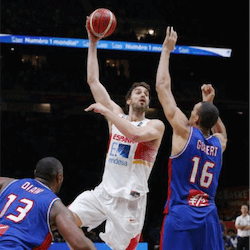 Greek basketball fans are crying foul on the NBA, after it was announced that Giannis Antentokounmpo has been withdrawn from the Greece team set to play in the 2017 FIBA Eurobasket tournament, which starts next Thursday, 31 August. Antentokounmpo, currently a wunderkind for the Milwukee Bucks in the USA, was expected to be the star of Greece’s attack on the European championship, but a test by Bucks staff has put him out with a knee injury.

Antentokounmpo had been playing with Greece in pre-Eurobasket exhibition matches, but began battling with knee pain. No records of his knee-scan have been released, however, leaving some Greek fans convinced that the NBA side are only interested in protecting the point forward for his US season, denying his home country a shot at Eurobasket glory.

Antentokounmpo has had three stellar three years with the Bucks, and his inclusion in the Greece team was one of the reasons the side was fourth in last week’s outright futures betting to win the tournament, ranked behind Spain, Serbia and France.

Greece remain the second seed in Group A behind France, but they have now slipped to fifth in the betting, behind Lithuania. Coach Kostas Missas and the Hellenic Basketball Federation are understandably miffed by the last-minute loss of their stalwart.

Greek fans might be slightly mollified by the fact that their team is still odds-on favourites to beat Iceland in their opening match of the tournament next Thursday. But without Antentokounmpo, some betting sites are now Greece at $15.00 for an outright championship win, although they can still be found at $5.00 on others. Check out Luxbet to see what odds this top online sportsbook has to offer.

With a week to go, online sports betting sites still rank Spain as the top Eurobasket contender, at outright futures odds ranging from $1.30 to $1.80. The Spaniards are also odds-on favourites to beat Montenegro in their opener next Friday.

Australian sports betting fans will also want to take a look at France and Serbia in their opening group matches; both also odds-on starting against Finland and Latvia respectively. France is at between $4.00 and $5.40 to win the tournament outright, with Serbia at $3.50-$5.00. Lithuania is at $6.00-$11.00.