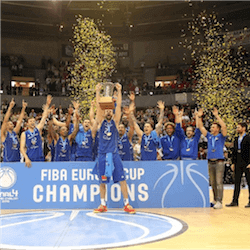 Outside the USA, basketball is generally a minority sport around the world, Australia included, albeit a fairly widespread and well-known one. But both here and in Europe, it has a dedicated fan base and provides plenty of action for spectators, television viewers and online betting enthusiasts alike.

Europe scores over Australia in that it has an enormous population, so even as a minority sport, basketball has a substantial pool of players and fans across the northern continent. This is evidenced by the fact that the FIBA Europe Cup, which saw its inaugural season played over 2016-17, is only a fourth-tier competition, yet it nevertheless drew entries from 42 clubs scattered across more than 20 nations.

The final field included four French clubs and four from Belgium, three from Hungary and three from Romania, two each from Turkey, Lithuania, Cyprus, Kosovo, Estonia, Bulgaria and Portugal, as well as teams from Israel, Russia, Belarus, Germany, Austria, Sweden, Czech Republic, Slovakia and the Netherlands.

The 2016-17 FIBA Europe Cup started on 18 October last year with the regular season, followed by a second round that started in December to determine the teams going through to the Round of 16. The Ro16 began on 8 February, and by the end of March, four teams were left standing in the semis: France’s Elan Chalon and Nanterre 92, Belgium’s Telenet Oostende, and Germany’s Telekom Baskets Bonn.

The close calls continued in the final. In the first tie, Chalon and Nanterre were perfectly matched; a fact reflected in the 58-58 score at full time. At the second tie in front of their home crowd, however, Nanterre just managed to cling to a lead, and they took the second match 82-79 for a narrow FIBA Europe Cup 2017 victory.

FIBA basketball action continues around the world for the rest of the year, including 2018 Europe Cup qualifiers in France and Andorra on 23-24 June.