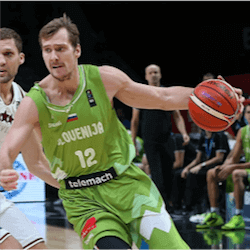 After three rounds of 2017 FIBA Eurobasket for Group A in Helsinki, Finland, and Group B in Tel Aviv, Israel, Slovenia are the only team in the two groups to remain undefeated. They beat Poland 90-81 in the opening match of the tournament on Thursday, and bested hosts Finland 81-78 in Saturday, with Miami Heat point guard Goran Dragic scoring 29 for his national side.

Sunday saw the big upset that put them at the top of the Group A ladder: beating group second seed Greece 78-72. Greece also succumbed to France on Saturday, with their solitary win against Iceland leaving them second-last on the Group A ladder; a reversal many punters will blame on the absence of their NBA star Giannis Antentokounmpo.

Tuesday sees Slovenia take on Iceland, then group top seed France on Wednesday. After losing to Finland in overtime on Thursday, France pulled off consecutive victories against Greece and Iceland to stay second on the Group A ladder, and they now play Poland before Wednesday’s crucial Slovenia clash.

Italy, Lithuania, Germany atop Group B

Group B matches also began on Thursday, with Germany beating Ukraine and Italy beating Israel. The surprise was Group B top seed Lithuania going down 79-77 to Georgia. On Saturday, Lithuania restored their reputation with an 88-73 win over Israel, while Italy beat Ukraine and Germany beat Georgia.

On Sunday, however, it was Italy’s turn to lose to Lithuania, while the Germans suffered a narrow 82-80 defeat by Israel, and Ukraine beat Georgia. The result is that Italy, Lithuania and Germany are separated only by points-difference, on 5 points each.

Groups C and D only began their rounds-robin, in Cluj-Napoca, Romania, and Istanbul, Turkey, on Friday, so they are only two games into the tournament and play again on Monday, Tuesday and Thursday. By Sunday, Spain remained undefeated against Montenegro and Czech Republic, while Croatia had beaten both Hungary and hosts Romania, albeit by much narrower margins.

Czech Republic won against Romania while Montenegro beat Hungary, but Spain and Croatia top the Group C ladder, with Spain still the odds-on favourite to win the tournament outright. Russia is the other side unbeaten so far, after triumphing over Serbia and Group D hosts Turkey. Latvia has one win, against Belgium, while Serbia beat Latvia, and both Belgium and Turkey beat Great Britain.