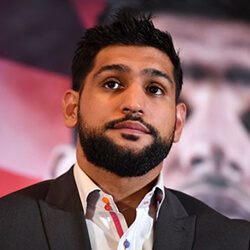 Amir Khan has stated that he expects to retire if he does not perform or feel well when he takes on Neeraj Goyat. The 32-year-old Briton has come under fire for choosing to fight Indian Goyat in Saudi Arabia for a total of £7 million.

Khan’s last match saw him taking on Terence Crawford in April where he lost, and has been linked to fights with Filipino Manny Pacquiao and British rival Kell Brook. Talking about his upcoming fight, Khan told reporters that he is waiting to see who he feels for this fight, and if he doesn’t feel like himself, he will probably call it a day.

The former super-lightweight world champion added that he wants to make that decision, and he doesn’t want to be forced to retire. Continuing, Khan said that he has achieved what he wanted in the sport, and from now on he just wants to enjoy it, and will wait to see how he feels in his fight against Goyat and will be taking it from there.

Khan will be arriving in Jeddah three weeks before taking on Goyat, and has said that Pakistan Prime Minister Imran Khan will also be attending the event with a letter being sent to invite Indian Prime Minister Narendra Modi. Khan hopes that he will be able to show that sport can bring nations together, especially concerning the difficult relationship between India and Pakistan over the last few years