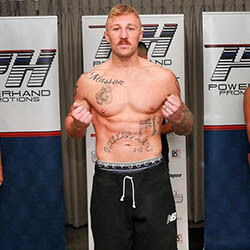 Floyd Masson, formerly of Te Awamutu, a town in the Waikato region in the North Island, has spent 12 years in the Boxing ring and has just become the No.2 ranked fighter in Australia. He’s a Cruiserweight, or Junior Heavyweight, one division below Heavyweight, its limit set at 90.7 kilograms. His record is quite incredible, with 8 fights won, none lost, and 5 knockouts.

Masson says that he started Boxing because he felt a bit lost and, although he’d tried several sports, nothing quite clicked with him. A close friend, Jamie Hansen, recommended fighting and Masson said it was love-at-first-punch.

The boxer now makes his home in Perth, moving there after his best friend Tyson Whalley, a fellow boxer, moved to the city to train with Sean Nash. Masson said he saw an incredible improvement in his pal and decided to talk to Nash. Nash agreed to coach Masson as well and the rest, as they say, is history!

Masson reports that the most difficult opponent he’s met in the ring so far was Christian Tsoye, from Cameroon. Tsoye had 300+ amateur fights behind him, says Masson, and was a beast in the ring, coming at him for the whole eight rounds. Masson says that he threw everything he had at this opponent but nothing seemed to slow him down. He says he was caught good and proper in the 8th round but, after digging deep, he managed to handle it and go on to win the state title fight.