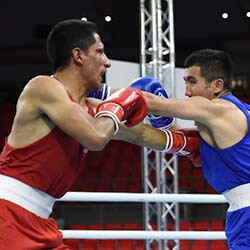 After securing a bye in the first round of Thursday night’s Olympic draw, 24-year-old light heavyweight boxer Paulo Aokuso found out that he will more than likely face off against current number one Bekzad Nurdauletov in the quarterfinals.

When Aokuso beat the then second-best light heavyweight in 2020, he put his division on notice. This would be the same competition that Nurdauletov would win by decision defeat.

The rest of the Australian boxing team have also recently learnt their fate, with some being luckier than others.

Many have dubbed featherweight boxer Skye Nicolson lucky as she also managed to secure a bye during the first round of the featherweight division. She will face off against South Korea’s Im Aeji next. If she makes it to the quarterfinals, she will fight against Brazilian Jucielen Romeu. At the 2018 Commonwealth Games, Nicolson won gold and at the 2016 World Championships, she earned a bronze medal.

On the not so lucky side, we have flyweight boxer Alex Winwood will also be competing, fighting against Zambia’s Patrick Chinyemba while lightweight boxer Harry Garside will be taking on Papua New Guinea’s John Ume. Caitlin Parker who is a Commonwealth Games silver medallist will be facing off against Panama’s Atheyna Bylon for a place in the quarterfinals. Of course, Aokuso has also made it onto the list of the unlucky few.

The team hopes to secure several podium finishes, and hopefully the first-ever gold for boxing at the Olympics – having not yet received one in the history of the tournament.

Russian boxer Maxim Dadashev has passed away at the age of 28 after he sustained severe injuries from his latest IBF light-welterweight fight against Subriel Matias. Dadashev was reported as ….