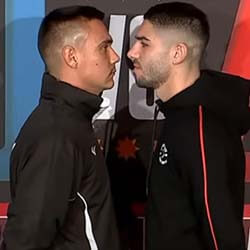 With new cases of COVID-19 being announced in New South Wales, Michael Zerafa and his team have chosen to pull out from the fight. This comes after the New South Wales government stating that a lockdown isn’t necessary.

Zerafa and his team will not be travelling to Newcastle amid increasing COVID-19 cases in the region. Fears of their safety have pushed the team to cancel the fight. This fight had been much anticipated following years of an intense rivalry between the two fighters. Fans have started to question whether this much-anticipated fight will ever take place.

Tszyu’s promoters have tried to ease concerns with Team Zerafa to ensure that the fight goes on. The venue capacity had even been halved to 3000 spectators while the fight had received the green light from NSW Health. Unfortunately, this was not enough to make the team comfortable with travelling to a location with a known COVID-19 outbreak. Zerafa has said they would take the fight if it was postponed, however, Tszyu were not happy with this.

Zerafa has stated that he is more than happy to fight in areas not fighting a COVID-19 outbreak. The health and safety of his team and trainers are important to him and will not be compromised for anything.

Of course, this announcement has not been well received by Tszyu who has stated that after three years of taunting and build-up, the time finally comes and they are making excuses. Zerafa has, however, said that he is still eager to fight but at a later stage.