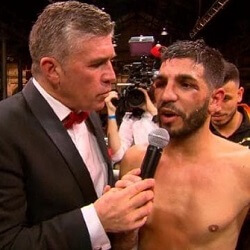 Billy Dib is set to take on long-time rival American Tevin Farmer in a fight to earn the IBF featherweight title, which is not currently held by anyone. A loss for Dib would be disastrous for his career, and he would most likely be forced to retire, Dib has recently told reporters.

Dib added that he’s been working with three-time former world champion Jeff Fenech in the hopes of being prepared to take on Farmer. Dib has had his eye on the IBF title for a while, and has trained extremely hard for his fight against farmer.

Farmer started boxing when he was 19, and after only losing four fights through his first dozen, he hasn’t lost again in almost seven years. Some don’t believe this is true, however, after a controversial split between him and boxer Kenichi Ogawa, but ultimately Farmer was given the title after the Japanese fighter was stripped of both the title and his win after testing positive for performance enhancing drugs.

At the moment, Farmer is the favourite to win, which Fenech believes is correct. He has also stated that the odds that are on Dibs will not reflect the fighter as he marches into the ring at Redfern’s Technology Park, and that the boxer has trained harder than ever over the last few weeks. He added that Dib is looking reinvigorated, that he is ready to fight to earn the title, and that it will be a difficult match for both boxers.