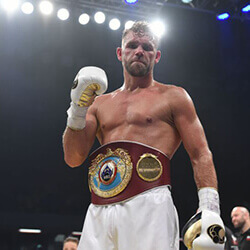 Billy Joe Saunders, a middleweight champion, has been set to defend his title against Martin Murray. The match was set for April, but had to be postponed until June due to an unforeseen accident that affected Saunders’ hand.

Saunders has since released a statement, saying, “I’m gutted for Martin and I’m gutted for the fans. I felt my hand go during a session this week and sought medical advice immediately. We’ve been left with no choice.”

Saunders has recently been hard at work building on his third title defence against David Lemieux from Canada. His fourth defence was set to be against Martin, 35, who hails from St Helens. This is also on the same bill featuring Daniel Dobois, Ohara Davies, and Anthony Yarde.

He goes on further to say, “This is an extremely tough sport and these things can happen. It is vital that I’m firing on all cylinders heading into this fight but for now it’s all about recovering properly and focusing on the new date.”

Apologies have been issued to fans, and a new date has been set for the end of June, with promoter Frank Warren assuring ticket-holders that their tickets will remain valid for the later date.

Warren also told fans of his plans for the match against Terry Flanagan and Maurice Hooker, stating, “I am speaking with Hookers representative Dino Duva and we will be making an announcement this week on where and when this fight will take place.”