Can Davies Beat the Odds and Taylor? 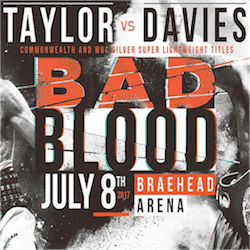 Aussie betting fans won’t want to miss the boxing action from Glasgow on Saturday night, with Josh Taylor v Ohara Davies the headline bout on the Bad Blood card at the Braehead Arena. Promoter Eddie Hearn’s ability to create grudge matches may annoy boxing purists, who accuse him of getting a bit… WWE; but there is no denying that the trash talking on social media by the two fighters is raising the bout’s profile effectively.

Both Taylor and Davies are undefeated champions, so barring a draw this fight will unite two titles, which is increasing the hype. Prestonpans-born southpaw Taylor, 26, represented Britain in the 2012 Olympics, and won gold at the 2014 Commonwealth Games as a light welterweight. Since turning pro in 2015, he has fought and won nine bouts, eight by knockout.

The 178cm Scot is currently the Commonwealth light welterweight champion, and bookies reckon he will be unstoppable in front of a home crowd on Saturday. He is being offered odds-on across the board, at around $0.60-$0.70.

Davies Confident He Can Surprise

Davies, who will be defending his WBC Silver super-lightweight championship belt, has vocally disagreed with the bookmakers. He reckons not only will he knock Taylor out, but he’ll do it within six rounds. Or else, he concedes, Taylor will knock him out within six rounds. Either way, the 25-year-old from Hackney, London, is not expecting a late night.

The Englishman has been boxing professionally only a year longer than Taylor, but he’s racked up 15 fights undefeated, 12 of them by knockout. So based on fighting experience, Davies’ confidence may not be misplaced, even though the Scot is 8cm taller than him and has an extra 2cm in his reach. Although the odds are favouring a Taylor victory, nobody is ruling out Davies: he is being offered at between $1.10 and $1.40.

Other boxers on the card include undefeated welterweight Gary Murray v an opponent still to be decided, and unbeaten super bantamweight fighter Gary Rae against tough Spaniard Luis Espinosa. Welterweight Ally Black will also feature, as will middleweight Aston Brown in only his second professional bout, after a dazzling amateur career.