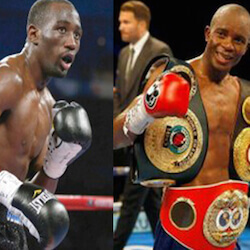 If you believe the betting sites, Namibian boxer Julius Indongo has no hope of winning his four-way title unification fight against Terence Crawford in Lincoln, Nebraska on Saturday night. The American is the odds-on favourite for the main bout in the Pinnacle Bank Arena, and Australian punters watching it live on Sunday morning and backing Crawford to win will be lucky to get odds of 5-10c on the dollar.

Indongo is being offered at between $6.00 and $10.00, with a draw reckoned unlikely at $25.00 and above. Whichever boxer wins, the fight will unify the IBF and WBA light welterweight titles, currently held by Indongo, and the WBC and WBO belts at the same weight, which Crawford is defending.

But even at those odds, is Indongo worth a punt at all? Does he stand any chance against the younger, more experienced American? Here’s a closer look at how they match up:

It’s easy to understand why Crawford is so heavily favoured in the betting. Born in Omaha, Nebraska, he’ll be fighting in front of a supportive home crowd. At 29, he’s also five years younger than the Namibian, and he’s remained undefeated in 31 fights. In fact, he’s won 22 of them by KO: the same number of fights Indongo has had in total.

The Nebraskan was a threefold lightweight world champion from 2014-15, and he has held the light-welterweight title under four different governing bodies since 2016. Currently, The Ring ranks him the best light welterweight in the world, and he also has the ability to switch from orthodox to southpaw. Despite the uninspiring odds, he is probably the smart-money bet.

Indongo’s a regular southpaw, and although he has less experience than Crawford, he’s also won all 22 of his fights; 11 of them by KO. He’s 6cm taller than the American, with an extra 3cm in his reach, and as he proved 40 seconds into the first round of his Moscow fight against Eduard Troyanovsky in December, if he lands the right punch in the right place, it’s lights-out time.

His last fight, against Ricky Burns in Glasgow, went the distance, but Indongo outclassed the Scot consistently to win by a unanimous points decision. The former IBO light-welterweight champion and current WBA/IBF title-holder thus has both the punching power and the boxing nous to be capable of a shock upset on Saturday.