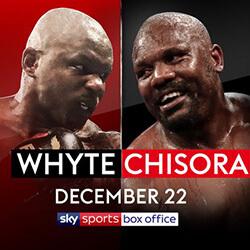 Two of the most highly anticipated fights of the year are just days away from taking place, and many consider that both will be in the running for best fight of the year.

Dillian Whyte and Dereck Chisora are getting ready to face each other as they meet for the second at the O2 in London, which will hopefully put an end to their long-running feud. The first fight between the two took place in December 2016, and saw Whyte emerge from the match as the victor, but only just. It was a long and difficult match for both, the likes of which isn’t seen often in the heavyweight division. Many felt that Chisora had edged it, and that he now has a chance to seek his revenge.

The rivalry has remained between the boxers two years later, with both men getting their best wins of their career on the same night. Chisora managed to pull himself back from the brink of defeat thanks to a knock out of Carlos Takam, while Whyte successfully saw off former heavyweight champion Joseph Parker in a fight that lasted 12 rounds.

Whyte has since emerged as a contender on the heavyweight scene over the last few years, remaining unbeaten since, with his only loss against Anthony Joshua. The 30-year-old has otherwise won eight successive fights. Chisora, the veteran slugger, has said that religion helped him sort his life out. Whoever wins will be set to take pole position to face Joshua.