Why Floyd Mayweather came out of retirement? 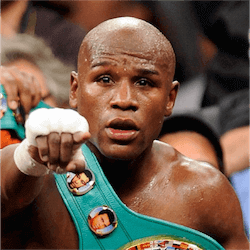 Why Mayweather Came out of Retirement?

It is a question that punters and boxing enthusiasts have been wondering for a while. Why has Floyd Mayweather come out of retirement? According to UFC champion Michael Bisping, the answer might just be linked to Mayweather’s finances. Bisping, the current UFC middleweight champion hosts a regular podcast called Countdown along with Luis J Gomes.

Bisping announced on his podcast that a trusted source told him that Floyd Mayweather might not be as financially secure as he claims to be. The boxing star is reported at having a net worth of 650 million US dollars, which equates to around 859 million Australian Dollars. Bisping said that he heard from someone in Vegas that Floyd recently lost a whole bunch of money in a scam.

While Floyd might not be financially crippled by losing such a large sum of money, he would certainly want to replace what he lost in the scam, for pride if nothing else. Since his announcement about coming out of retirement, there has been a lot of talk about Mayweather getting in the ring with Conor McGregor. In the last few days, it seems the talk has reached a fever pitch.

Just days after Mayweather made his announcement, it was reported that a hold had been put on the T-Mobile Arena in Las Vegas as a possible venue for the showdown with McGregor. At the time, Michael Bisping was sceptical of whether the fight would actually take place. Today it seems he has changed his tune. Now he has gone on record saying that his bet is the fight will take place. When he is not sure, but it might be soon.

According to Bisping, both fighters stand to make a bucket load of money out of the deal. Bisping says that if he is being honest, he is actually looking forward to seeing the fight. If everyone makes money in the process, so much the better. How it works is that the fighters have to agree on a purse and then the UFC would agree on a split. At the end of the day, the UFC are business people and if the pot is big enough, there is little chance they will say no.

From Bisping’s point of view, McGregor not only stands to make a massive amount of money from the fight, he would actually stand a decent chance of defeating Mayweather who remains unbeaten to this day. He would simply have nothing to lose and he also has the skills to go toe to toe with Mayweather.