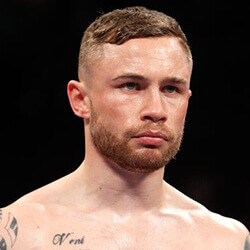 North Irishman Carl Frampton has made a sombre declaration. In a recent statement, he admitted that his bout against the former four-weight world champion ‘Filipino Flash’ Nonito Donaire is a career maker or breaker. The bout is for the WBO Interim featherweight title, set to take place in Belfast next Saturday. And, if there was ever any question before, the declaration from Irish Frampton has put the event into perspective.

Frampton went on to clarify that that the incredible importance he places on the bout is due to the stage at which his career currently stands. He was quick to point out, however, that Nonito Donaire likely feels in the same boat.

He continued by stating that losing is never good for a fighter’s career, but that at this stage in his career, a loss now would be bad for potential future fights down the line. He then pointed out that a win would be everything, and allow him to fight at Windsor Park in the summer. But, of course, he clarified that he was well aware of how dangerous Donaire was, and would not be underestimating him.

Frampton finished the statement by detailing some of his training specifics, and confirming that he felt good for the fight. And, optimistically, mentioning that a win against Donaire would put him up against Oscar Valdez in the future.