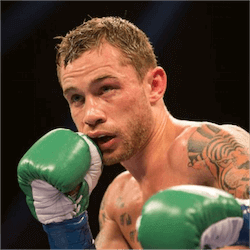 Truth be told, Irish featherweight Carl Frampton would much rather be facing Leo Santa Cruz when he climbs into the ring in Belfast’s SSE Arena on Saturday night. A former World Champion in two divisions, Frampton is still smarting from losing his WBA (Super) Featherweight title to the Mexican in a points decision after their Las Vegas bout in January.

The 30-year-old was keen for a shot at taking back the title in front of his Northern Ireland home fans, but after bearing the brunt of an overwhelmingly partisan crowd in Vegas, Santa Cruz wasn’t falling for it. Instead, Frampton, with a 23-1 win-loss record including 14 knockouts, now takes on 24-year-old Mexican boxer Andres Gutierrez in a WBC World title eliminator on Saturday.

It may not be the fight Frampton wanted, but Saturday’s bout is stirring up interest on betting sites online, as well as live in Belfast. The fighters will participate in a public workout at Belfast’s Victoria Square shopping centre on Wednesday, with a final press conference at the Europa Hotel on Thursday.

The weigh-in on Friday will also be at the Europa Hotel. In terms of the betting, however, bookies only see it one way. Frampton, in his first fight since losing his title, is the odds-on favourite. Punters will be lucky to find him offered at $0.05; most sites are offering even less.

Gutierrez Outsider Bet May Pay Off

It’s not clear why betting sites are so confident that the Mexican has no chance, other than perhaps the perception that Frampton has had years more experience against top-level opponents. But on paper, Gutierrez actually has the edge. That starts with a higher career record: in 37 professional bouts, he has only one loss and one draw, and 25 knockouts.

He’s also six years younger than the Irishman, five centimetres taller, with 13cm on his reach. If Gutierrez remembers to box on Saturday night, rather than getting drawn into a slugging brawl, he could indeed deliver a nice surprise to punters backing him at $8.00-$14.00.