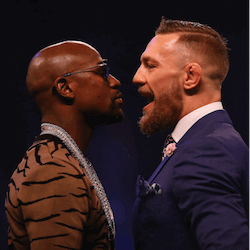 After weeks of hyperbole from the fighters and trial-by-social-media, the Nevada State Athletics Commission has decided to waive its own rules and allow the Floyd Mayweather Jr v Conor McGregor fight to go ahead using 8-ounce (227-gram) gloves.

Under NSAC regulations, any fight set at over 147 pounds (66.7kg) must be fought with gloves weighing 10 ounces (284g). Although the Las Vegas boxing/MMA mash-up is set for 154 pounds (69.9kg), both fighters’ representatives had petitioned the commission for the waiver.

MMA and UFC fans, in particular the less savoury elements who revere McGregor as an emblem of ‘white power’, thanks to his unsubtle flirtations with racism at press conferences and in social media, were delighted with the decision.

The Irish mixed martial artist has fought in fingerless 4-ounce (113g) gloves over his entire career in the octagon, and he needs all the punching power he can get in his first fight under boxing rules.

The announcement has seen McGregor’s odds at online betting sites shorten. Punters can now get between $3.00 and $4.10 on the Irishman if he wins, which is a far cry from the $30.00 and over that he started on.

But it’s not certain that the lighter gloves will be the advantage his supporters think they will be. Mayweather has fought undefeated in 8oz gloves for most of his 49-bout career, so he isn’t likely to be fazed by them. He’s one of the best defensive boxers of all time, and if the fight goes the distance, it’s highly unlikely McGregor will be ahead on points. He’ll need a knockout, and he’ll need a lucky punch, against a fighter who has been hit with 8oz gloves a lot, and never lost.

The betting sites appear to agree. Although McGregor’s outright-win odds shortened after the NSAC announcement, Mayweather’s have stayed exactly where they were: at returns of 10c to 20c on the dollar. Any betting fans who want to make a better return backing the American, should consider taking a punt on him at Crownbet wagering that Mayweather will knock McGregor out in the first or second round instead.