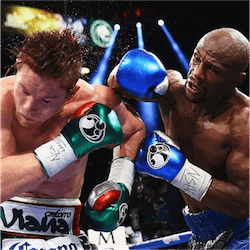 The much hyped middleweight rumble between Gennady ‘Triple-G’ Golovkin and Saul ‘Canelo’ Alvarez in Las Vegas in September took in the third-highest gate in boxing history, so it’s understandable just how many boxing fans were incensed when it went the distance, only to end in a split-decision draw.

It was a courageously contested fight that many pundits felt Golovkin had won narrowly, and judge Adalaide Byrd took a lot of flak for scoring it 118-110 in favour of Alvarez; a massive margin that precipitated the draw.

According to the Mexican’s management, Golden Boy Promotions, Alvarez had an immediate rematch clause in his contract should he have lost, but it is unclear whether that applied to a draw.

What is clear is that both Canelo and Triple-G are as keen as the world’s boxing punters to see a rematch, but pinning down a date is proving elusive.

As of Sunday, January 7, president of Golden Boy Promotions Eric Gomez was telling reporters that negotiations for the rematch were ‘very close’, having resumed after a break for the holidays.

Late last year, Tom Loeffler of K2 Promotions, the outfit that handles Golovkin, also said that he hoped to see the fight finalised before Christmas, which obviously didn’t happen; but at least it’s an indication that the undefeated Kazakhstan champ is also eager for a rematch to decide what the last fight didn’t.

Rumour has it that the bout will most probably be set for May, and after the success of the last meeting between the pair, the T-Mobile Arena in Las Vegas will no doubt be keen to host it again. However, there are other whispers that the AT&T Stadium in Dallas, Texas, is also bidding for the bout.

If the Golovkin v Alvarez rematch does come off in May, the WBC could have a surprise in store for the winner.

Jermall Charlo and Hugo Centeno Jr will shortly contest the interim WBC middleweight champion, and the WBC may well insist that whoever takes the interim title is the compulsory next opponent of the winner of Golovkin v Alvarez, to unify the championship.

So it looks like boxing could throw up some interesting developments for punters this year.