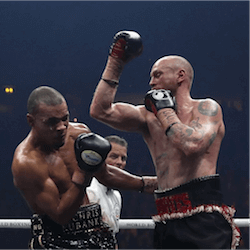 Chris Eubank Jr fans who bought into “the Next Generation” hype are a little shell-shocked after his WBSS Super-Middleweight semi-final defeat on Saturday in Manchester, England – richly deserved though it was, it has to be said. It wasn’t the fight of the year.

Hammersmith 29-year-old George Groves, reigning WBA (Super) and IBO super-middleweight titles holder, simply gave “the machine” a boxing lesson; there’s no kinder way to put it. Eubank Jr’s performance, most pundits agree, was a reminder that comparing his reputation to his dad’s doesn’t do the 28-year-old Hove boxer any favours.

Groves took a unanimous 12-round decision to win the fight at the Manchester Arena on Saturday night, despite dislocating his shoulder in the 12th round. Eubanks Jr got away with a cut over his right eye, sustained during a clash of heads during round three, and was periodically troubled by blood in his eyes for most of the fight.

What Next for Eubanks Jr?

Despite his lacklustre showing on Saturday, and in the face of other boxers and pundits suggesting, with various degrees of snark, that he should return to the middleweight division, Eubank Jr said he’s keen to fight James DeGale, the former IBF super-middleweight champion, next.

Cynics reckon that even if the former super-middleweight IBO title-holder did return to the middleweight rankings, where he once held the British and WBA interim titles, the likes of Gennady Golovkin, Jermall Charlo, and Saul Canelo Alvarez, to name just a few of many, would outclass him badly too.

If he fails in his quest to secure another title at the super-middleweight level this year, he’s going to have to seriously reconsider his boxing future.

Next up for Groves, of course, is the World Boxing Super Series Super-Middleweight final, scheduled for June 2 in London’s O2 Arena. The second WBSS SM semi between Brit Callum Smith and German Jurgen Brahmer, which will decide his opponent, is set for February 24 in Nurnberg.

Groves’ biggest worry is his injured shoulder, of course. His record is now 28-3 (20) and based on his fighting in the series so far, he’s looking like the favourite.

But he’ll need to be fighting fit again; only time will tell whether he can be properly recovered by June, or if the final will have to be postponed.