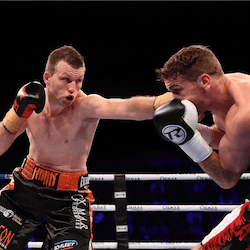 If the betting odds were anything to go by, Aussie bookies and punters alike were expecting a substandard bout when Jeff Horn defended his WBO welterweight title against British boxer Gary Corcoran in Brisbane on Wednesday.

Horn stepped up to the plate, and there were no surprises or shocks at the end. Horn took a solid victory and claimed the WBO welterweight title with ease. Horn (18-0-1, 12 KO) stopped challenger Corcoran (17-2, 7 KO) and the fight reached its conclusion when referee Benjy Esteves Jr called time at 1:35 in the 11th round. The ref was acting on instruction from Corcoran’s corner and it was clear he was done. Corcoran was simply outclassed in the fight that was both a rough and active one and both fighters were left with several cuts. However it was the cut above Corcoran’s eye that was the final blow and this stopped the fight, leaving Horn the inevitable winner.

In fact, Horn’s first defence of his title was supposed to be a rematch against Pacquiao, which would have seen the two fighters much closer in the betting. However, Pacquiao’s day-job as a senator in the Philippines is claiming his attention right now, so Horn got Corcoran instead.

There have been suggestions that the two will get their rematch next year: especially now that Horn still holds the title. However, if recent revelations by Pacquiao are anything to go by, the former champ may not be in a hurry to take back the belt, with more lucrative options on the table.

Another Money Fight With Conor McGregor?

Having lost to one boxer in the form of Floyd Mayweather Jr, it doesn’t look like Conor McGregor is planning to play it safe and stick to UFC. Pacquiao recently told reporters that his team had been in contact with McGregor’s, looking at the possibility of putting on another boxing bout featuring the MMA star.

There has been no word whether McGregor will go for the idea, but given the enthusiasm with which he threw himself into the Mayweather fight, and the chance of yet another huge ‘money fight’ payday, it’s possible that he and Pacquiao could set up a bout in April 2018, which would see a potential Horn-Pacquiao rematch recede even further.