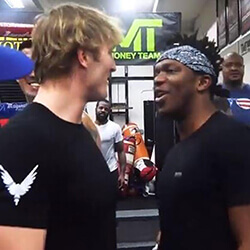 As August comes to an end, many are growing excited for one of the biggest moment’s in YouTube history: a boxing match between controversial YouTube stars KSI and Paul Logan. The fight is set to take place at the end of August, and will be held at the 21000-seat Manchester Arena, with tickets selling out quickly.

The boxing match comes after many months of verbal sparring for the two stars, and a month after they exchanged insults at York Hall in London’s Bethnal Green. It was the first of its kind to take place at the old boxing venue, and all 1000 seats were packed with a young audience eager to watch their favourite online video personalities have a go at each other.

KSI, a professional FIFA gamer who found greater fame as an Internet personality, will be defending his self-proclaimed title of YouTube boxing champion against Paul. KSI’s title was earned earlier this year after he won a three-round knockout against fellow YouTube start Joe Weller, and fans of both Logan and KSI have been mounting on the pressure for the two to duke it out.

Logan Paul has been under constant fire over the last year after he posted a controversial video of him and his friends making fun of a suicide victim in Japan, but the YouTuber has never been more popular, and both him and KSI boast channels of 20 million subscribers each. It should be a fight worth remembering.