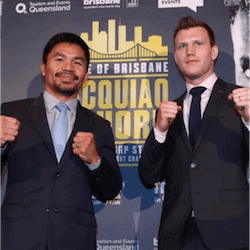 On Sunday night, Jeff Horn is going to get to do what plenty of Australians would love to do, and smack a politician around in public. Unfortunately for The Hornet, that politician is the Philippines’ senator Manny Pacquiao, so he will be hitting back quite hard.

Australia’s online betting community is abuzz over the WBO Welterweight Championship bout at the Suncorp Stadium, and Queenslander Horn is going to have the vast majority of the Brisbane crowd behind him. Unfortunately, if that’s all he’s got, it’s going to be a very short fight. Despite the 29-year-old’s impressive record of 17 bouts undefeated, veteran Pacquiao has fought in almost four times as many, and he’s only lost six times.

Pacquiao’s Record Speaks for Itself

Nobody is questioning Horn’s guts or commitment. Even when losing at amateur level because he was simply overmatched, such as his London Olympics quarter-finals loss to Ukraine’s Denis Berinchyk, he kept coming back and fought with valour throughout.

But on Sunday, he will be facing a fighter who is arguably still the best welterweight in the world, even if some have dismissed him as a ‘part-time boxer’ since he won political office. Fighting part-time, Pacquiao has beaten Chris Algieri, Timothy Bradley and Jessie Vargas in the past three years, bringing his career record to 59-6-2 in 67 bouts, with 38 wins by knockout.

His most recent defeat was a points decision after 12 rounds against Floyd Mayweather Jr in May 2015. Horn may not be quite the nonentity implied by Pacquiao’s dismissive ‘I don’t know who Jeff Horn is’ when the fight was announced, but he’s no Floyd Mayweather Jr either.

Betting Only Going One Way

Nevertheless, Horn still has a number of fans who reckon home ground advantage and sheer determination can make up for the fact that Pacquiao is a better, more experienced boxer. They point out that Horn is bigger, younger and faster; but Vargas and Algieri are bigger, too, and Vargas certainly had youth and speed on his side. It made no difference to the Filipino: either fighter could probably prove a match for Horn, but Pacquiao ploughed through them both.

As a result, online betting fans won’t even get even money on Pacquiao this Sunday. He is currently being offered at between $0.10 and $0.20. If Horn can pull off a miracle, and courage and enthusiasm manages to beat skill and experience, punters backing him will be smiling: he’s currently at between $3.50 and $6.00.