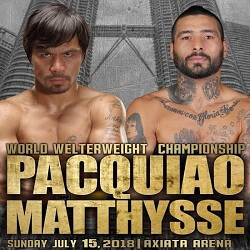 It’s been touch-and-go with the long-anticipated Pacquiao vs Matthysse fight, but despite some financial issues among organisers, it’s been declared that the match is officially still on.

This comes after Eric Gomez, president for Golden Boy Promotions, announced that there were some financial issues that were affecting the fight, and that there were rumours that it would possibly be cancelled. Gomez would later on to confirm that the fight would still continue, and that all financial problems had been resolved.

The fight is set to take place at Axiata Arena in Kuala Lumpur, Malaysia. Gomez has since told reporters that the fight is still on, and that everyone faced a few bumps in the road. He added that after much work, everything was back in order, and that it was a fight that was over five years in the making. He further explained that the money is now in place, and that the problem arose because of a United States escrow account.

When professional fights are organised, money is typically sent to an off-shore escrow account, and this was the cause of the recent problems that plagued the fight, but the money has since been deposited.

MP Promotions was said to be the reason for the financial delays, as the company failed to make a series of deadlines, where they were meant to deposit a sum of $2 million. MP Promotions finally sent the money in, and the fight was set to continue as planned.