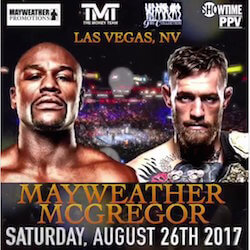 In three weeks, Floyd Mayweather Jr will climb into the ring at Nevada’s T-Mobile Arena to fight Conor McGregor, and months of relentless promotion and trash talk will come to a head in what looks set to be the richest boxing match in history. The hype will be over, with everything finally coming down to the 40-year-old five-division boxing world champion versus the 29-year-old mixed martial arts two-division title holder in 12 rounds of boxing.

Mayweather, understandably the odds-on favourite since McGregor has never fought in a competitive boxing match, upped the pre-fight gamesmanship recently by offering to fight in 8oz (227g) gloves. It’s a somewhat cynical offer, as he knows under boxing rules that they will have to use standard the 12oz (340g) version.

McGregor, used to 4oz (113g) gloves in his 24-bout MMA career, has in any case delivered a typical mouthy rejection of the idea, claiming that he doesn’t f-ing care about the f-ing gloves. That may be sheer bravado, though: restricted to a third of his usual fight repertoire as he can’t kick or grapple, and facing one of the best defensive boxers of all time, the Irishman’s going to need any advantage he can get in Vegas.

Get $25.00 on Mayweather Winning Fast

Mayweather retired undefeated from boxing, for the second time, after 49 fights, having successfully defended his WBC/WBA welterweight and super welterweight titles against Andre Berto in the MGM Grand Garden Arena on 12 September, 2015. McGregor, in contrast, has three losses on his record, so it’s not surprising the American is the odds-on favourite to win the August 26 fight.