Mayweather and McGregor meet in LA 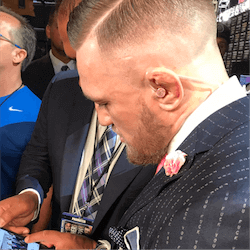 Even if you think of the upcoming boxing match between MMA fighter Conor McGregor and former boxing champion Floyd Mayweather as just a moneymaking exercise, it was very difficult not to get excited at last night’s press conference.

The two fighter’s camps are currently engaged in a world tour to hype up the upcoming event and if the show that was put on at the Staples Centre in Los Angeles is anything to go by, we are in for a treat.

A Clash Of Fashion

During the traditional stare down pose for the press, it was quite a glaring contrast between the two fighters. McGregor was dressed sharply in what appeared to be a bespoke a pinstripe suit while Mayweather was dressed casually in a tracksuit styled after the American flag.

When the two fighters stepped up to meet each other face to face McGregor could not help but do a quick boxer stance and bobbed and weaved in front of Mayweather who did not seem impressed.

Many fans hoped to see McGregor trash talk Mayweather but most of the jabs came from a confident and articulate Mayweather. When the fighters came up to the mic, Mayweather bragged about his financial situation after he revealed earlier in the week that the taxman is knocking at his door.

He displayed his wealth by taking out a $100 million cheque that he has yet to cash, a cheque he received from his $220 million dollar Manny Pacquiao fight.

McGregor retorted that that money should be handed over to the IRS to which Mayweather quickly responded that HE is the IRS and he is about to tax McGregor’s “A**”.

Fans that feel this type of language brings the sport down should definitely not closely inspect the pinstripes on McGregor’s suit. They are in fact not stripes at all, but instead spell out “F*** You”, a clear message to Mayweather.

McGregor Not A Smooth Showman

The two fighters were joined by 20 000 fans in the Staples Centre in Los Angeles. Mayweather took the large audience in his stride but it was clear McGregor was not completely comfortable with his role as showman. He did however state that he will knock Mayweather out in the fourth round. He says he would be able to end it in the 1st round but due to the rules of boxing it won’t be a real fight, so he will need to wait till the 4th.

Since the two fighters sized each other up, it is hard not to notice the weight and size advantage McGregor has. He could potentially be one of the largest opponents Mayweather has faced. With his MMA background it is clear McGregor can take a beating but whether he can break through Mayweather’s tight defence in their upcoming bout is another question. Punters keen to back the man in the suit or the man with the big mouth can get in on the action at Crownbet and put their money where their mouths are!