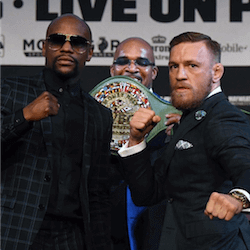 In a surprise move, the undefeated boxing champion and the almost-undefeated MMA hero changed tactics at their final press conference on Wednesday. Instead of the profanity, vitriol, and casual slurs framed around race, gender and sexuality that have characterised their circus of a promotional tour, the two men instead delivered calm, professional assessments of the fight ahead..

Mayweather called his Irish opponent ‘a stand-up guy’, and ‘a hell of a fighter’ who has had ‘a hell of a career’. McGregor couldn’t quite brings himself to utter reciprocal praise of the boxing legend, but he did at least concede that the subdued atmosphere of their final press conference was ‘more business-like, the way I like it… sometimes!’

Od course, there’s no need to look at the odds or either fighter’s history to know who the winner will be: it’s already obvious to most pundits that the biggest winner on Saturday night is going to be money. Rumours of the total purse for each fighter vary wildly, but it looks like Mayweather will walk away with at least US$200-million, or even as much as US$300-million, with McGregor set to net at least US$100-million; win or lose.

The folks who will really delight their bank managers, however, are the fight promoters and Pay Per View outfits. Tickets sales in Vegas are expected to top US$70-million, with another US$700-million the estimated global PPV revenue. As to how much fans are wagering in bets, that’s anybody’s guess.

The bout is truly living up to its moniker, ‘The Money Fight’, and the belt that the winner will receive drives home the point. On a 1,5kg base of alligator skin and gold, the Money Belt also crams in 3,360 diamonds, 300 emeralds and 600 sapphires. It is undoubtedly the most fitting memorial to this extravaganza that anyone could devise.

Mayweather is still odds-on to win, at around 20c on the dollar, with McGregor’s odds shortening drastically in the past weeks. He’s now at $3.50-$4.00.