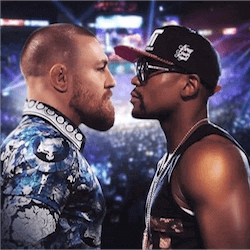 Mayweather and McGregor and Macbeth

Life, according to Shakespeare’s Macbeth, is a tale told by an idiot, full of sound and fury, signifying nothing. He might just as well have been talking about all the hype around the Floyd Mayweather Jr vs Conor McGregor fight scheduled for the T-Mobile Arena in Las Vegas on 26 August.

Which is not to say that The Money Fight isn’t providing plenty of entertainment for both boxing and MMA fans. Social media is aflame with each side predicting humiliation for the other, and it’s going to be one of the most lucrative pay-per-view events in history, along with record, albeit confidential purses for both fighters.

No doubt, it’s also going to do a lot to foster some respect for boxing among MMA enthusiasts, and vice versa. Both McGregor and Mayweather have superb records in their respective disciplines, both are multi-division champions, and neither is short on heart, so it promises to be a gritty thrill-fest with no quarter asked or given and you can choose who you want to back at Crownbet.

All that said, though, the smart money is on the American. Undefeated in 49 professional bouts and a five-division world champion, the Money is facing an opponent, in a bout held under boxing rules, who last boxed as a teenage amateur.

No wonder Australian online sports betting fans are being offered less than 20c on the dollar to back Mayweather for the victory. The 180 Million Dollar Dance will undoubtedly be exciting, but McGregor will need a miracle if he is to please punters wagering on him at $4.00 or more

Judging by the pictures of his training regimen posted online, Mayweather’s ice baths and yoga sessions reveal an athlete serene is his 11 world championships. McGregor has been sharing more aggressive posts, showing off his punches during sparring.

Which neatly ignores the fact that he will be facing a phenomenal defensive boxer, while unable to draw on the kicking and grappling arsenal that has helped to make the 28-year-old Dubliner a two-division UFC champion.

He will also have to adapt to gloves that are almost 300g heavier than those he’s used to. All in all, it’s fair to say that McGregor will have performed above expectations merely by holding out long enough to lose on points.