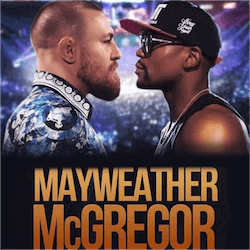 It is, without a doubt, going to be the biggest money-spinner in boxing history: and that includes the thousands of online betting enthusiasts in Australia who will be taking a punt on the Floyd Mayweather Jr vs Conor McGregor super-fight in Las Vegas on 26 August.

Not for nothing has this bout been dubbed The Money Fight and The 180 Million Dollar Dance; reliable pundits are estimating that total revenues could exceed the $600 million that the Mayweather vs Pacquiao match raked in.

One of the reasons it will draw so much revenue from pay-per-view, the gate and unprecedented sponsorship and advertising rates, is the fact that this battle caters to two huge markets: boxing fans, and mixed martial arts aficionados.

Mayweather is the undefeated 11-time boxing world champion across five divisions, whereas McGregor, while an amateur boxer in his teens, has forged his professional fighting career in MMA.

The Irishman is the reigning UFC Lightweight Champion and former UFC Featherweight Champion. However, he will be restricted to using his fists for the Mayweather bout, as the match is to be fought under boxing rules.

With Mayweather’s purse rumoured to be at least $100 million, and McGregor’s said to be around $75 million, the money on the line and the looming showdown between the two disciplines already has fight enthusiasts and social media abuzz.

Kicking up Controversy from the Start

The bout has been controversial since it was first dreamed up. When rumours first surfaced, UFC president Dana White dismissed them contemptuously, saying he’d have more chance of playing back-up quarterback to Tom Brady in the Super Bowl. A few short months later, he had to back-pedal rapidly, and the fight was confirmed on 18 May.

Veteran boxing referee Kenny Bayless also stirred up social media arguments, after he said he wouldn’t want to see the bout, as boxing and MMA are two different sports, making it pointless. Nevertheless, he is on the list of potential refs for the match, although McGregor’s camp has vowed to object if he is appointed.

Perhaps the cheekiest comment has come from British boxing great Tyson Fury. He reckons McGregor is going to end Mayweather’s career record of 49-0 by a knockout within 35 seconds, like he did in the first round against Jose Aldo at UFC 194. One thing is certain: the American champ will have lots to prove when he climbs into the ring.