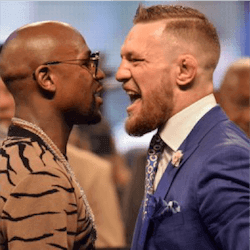 Insane money and wall-to-wall hype are keeping Australian online betting fans’ attention on the Floyd Mayweather Jr v Conor McGregor fight in Las Vegas on 29 August. Undefeated Mayweather is the overwhelming favourite; no surprise, considering that his Irish MMA opponent will be fighting under boxing rules for the first time in his career.

Die-hard McGregor fans, conversely, insist that the UFC champ’s fists alone will be enough to vanquish the USA’s former five-division champion. They’re as confident and mouthy as McGregor himself, and even as the underdog in the betting, the Irishman is attracting lots of action.

What many of the vocal young fans on both sides don’t realise, of course, is that this isn’t the first time international fight punters have been fired up by an inter-disciplinary mash-up. Way back in June 1976, a boxing showman to rival even McGregor’s self-aggrandising antics took on a champion wrestler in another match that captured attention all over the world.

The boxer was the USA’s Muhammad Ali, at that time the reigning WBA/WBC heavyweight champion after beating English fighter Richard Dunn a month before. His opponent was Japanese professional wrestler Antono Inoki, who was staging a series of exhibition bouts to promote his New Japan Pro Wrestling franchise, launched in 1972.

Rules Uncertain to This Day

Unlike the Mayweather/McGregor fight, which will be a boxing match, Ali/Inoki was fought under rules specially created for the event. However, conflicting versions have circulated ever since, and no definitive set of rules exists, although it appears that kicking, grappling and throwing were allowed as well as punching.

Whatever the actual rules were, the highly anticipated event turned into a huge anti-climax. Inoki spent most of the 15 rounds on his back, kicking Ali’s legs, and the US champ got to throw only six punches in total. The judges scored the bout a draw.

The disappointing result led to fans trashing the Nippon Budokan Arena in Tokyo where the fight took place, and left a disgruntled 1.4-billion TV viewers worldwide. Cuts on Ali’s legs from the kicking festered, and contributed to the mobility problems that culminated in him losing his title to Leon Spinks in 1978.

Inoki, on the other hand, enjoyed a wrestling career lasting another 22 years, and the bout is said to have inspired the creation and success of MMA. There might be a moral in there for Floyd Mayweather Jr, as he waves his $100-million cheque around…