Is McGregor on a Great White Hype? 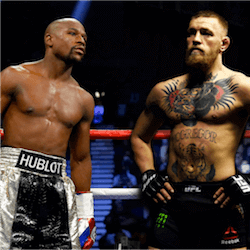 The international four-city tour to promote the Floyd Mayweather Jr v Conor McGregor boxing match on 26 August ended this week, and it certainly captured the imagination of the sports-as-soap-opera crowd. Both fighters drew huge crowds of fans to the events in Las Vegas, Toronto, New York and London, with tickets in NYC and London changing hands on eBay for up to AU$100: outrageous, for a press conference.

So the Money Fight is already spinning money for lots of entrepreneurs, apart from the more than AU$750-million the pay-per-view event between the undefeated boxing legend and the two-division MMA champion is expected to rake in. It’s also delivering the kind of gutter shade throwing that’s usually beneath professional boxing.

McGregor’s specialities seem to be racist dog-whistles and personal attacks on Mayweather’s wife and daughter, while the American boxer is more at home with homophobia, although he and the Irishman are tied on misogyny.

But given that McGregor deliberately dresses like Pimped-Out Liberace, and taking into account the fact that no serious pundits are giving him a hope, under boxing rules against a five-division world boxing champion who has never lost a fight in 49 bouts, Australian punters have to ask: is the MMA fighter pulling a fast one, along the lines of the movie The Great White Hype?

Can Mayweather be Lulled into Complacency?

Comedy fans will be familiar with the 1996 film, starring Samuel L Jackson as an unscrupulous fight promoter and Damon Wayans as a boxing world champion. With fight revenues falling off, Jackson organises a big-money racially charged match against a former amateur boxer, the ‘great white hope’ played by Peter Berg. The hype is huge, and the champ gets complacent, lazy and fat, while the no-hoper trains his heart out…

Is the viral online clip, of McGregor getting knocked out in sparring, a bait-and-switch to make Mayweather relax? Is McGregor’s sparring partner, South African welterweight Chris van Heerden, correct, when he says that the Irishman’s punch is big enough, should he land one, to knock Mayweather out?

Perhaps. Perhaps McGregor, at $4.00, will deliver a surprise with a lucky punch, disappointing those backing an odds-on Mayweather. But remember The Great White Hype: the veteran, experienced champ, bloated and out of condition, comes out to face the super-fit amateur… and knocks him out in the first round. The promoter makes a fortune.