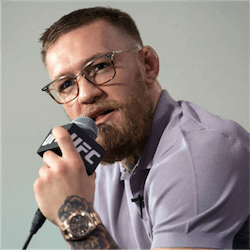 In his defence, Conor McGregor tends to call all his opponents ‘boy’ in his pre-fight trash-talk. So his decision to continue using the term to address Floyd Mayweather Jr in their international press tour ahead of their August 26 boxing match in Las Vegas could be viewed as blithe ignorance of US history, rather than racist malice.

Making comments about ‘dancing monkeys’ on his Jimmy Kimmel appearance, however, doesn’t look quite as innocent. And as for answering charges of racism by claiming he’s ‘half-black’, followed by a tired joke about his endowments, so far unsupported by photographic evidence, it has to be said, in his otherwise relentless social media posts, the less said the better.

Perhaps the Irishman tosses out these lazy stereotypes because his insular environment is so inured to casual bigotry that he really doesn’t realise he’ll cause offence. Or perhaps, say the cynics, he knows exactly what he’s doing, and he’s steering as close to a line as possible, to get more white nationalists rooting for him on the betting sites.

McGregor has a long history of ethnic slurs in his verbal sparring with opponents, and he is called ‘our racial champion’ on a notorious white-supremacist website: which simultaneously accuses the Dubliner of ‘selling out’ by taking a huge purse to be inevitably beaten by a so-called ‘racial inferior’.

However, not everyone believes that Mayweather’s victory is certain. A significant portion of MMA fans see professional fighters as proxies for their own race theories, and the undefeated five-division boxing world champion’s undisputed advantage against an opponent who has never boxed means nothing to them.

Punters will be lucky to be offered 15c on the dollar backing a Mayweather outright win at most online betting sites, while UFC two-division champ McGregor is $3.50-$4.50. Nevertheless, the underdog is attracting more than 53 per cent of the betting, with another 14 per cent of punters backing a $33.00 draw.

Less than a third of the wagers are being placed on Mayweather, although he has responded to McGregor’s racial taunts by assuring fans that he will be fighting for ‘all the black people’. That might sound presumptuous from someone who stands to earn the equivalent of Micronesia’s annual GDP if he wins, but it certainly won’t dissuade any fanatics planning a bet on McGregor.