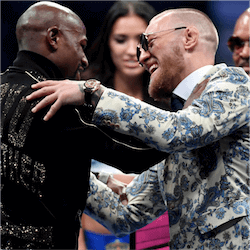 The word that was being thrown around most on sports betting sites and boxing blogs on Sunday was ‘outclassed’: as in, ‘Floyd Mayweather Jr simply outclassed Conor McGregor in their Vegas superfight.’ Which is ironic, since the one thing conspicuously absent from both fighters’ repertoire in their pre-fight press conferences was class.

Once they shut up and got punching, however, it was different story. Neither man is much of a role model out of the ring, but they do know their stuff inside it. Predictions that McGregor, stripped of two-thirds or his MMA arsenal and fighting in his first boxing match, would go down in the first round against the undefeated former World Champion, turned out to be nonsense. The Irishman held out for 10 of the allotted 12 rounds, before the referee called it a day.

Even then, after two powerful right hooks had left him jelly-legged and glassy-eyed, McGregor seemed game to continue until Mayweather could put him on the canvas, unconscious. Whatever anyone says about his trash mouth, there’s no denying the UFC champ’s heart in the ring.

The consensus among boxing pundits was always that McGregor probably had the power in his punch to knock out Mayweather, but landing one right would be a matter of luck. That appeared to be the Irishman’s strategy at the start of the fight.

He came out in Round 1 heavily on attack, and managed to land a few blistering punches early on, to win the first three rounds. But Mayweather didn’t get to a career record of 49 fight undefeated by falling for a sucker punch in the early rounds: patience and defence are his specialities.

McGregor is used to bouts lasting no more than five rounds, and once the American began counter-punching in earnest from Round 4, his opponent’s fatigue did the rest. The Notorious almost went down from a massive right hook in the seventh, and Mayweather’s clear dominance in the 10th decided the matter.

McGregor’s gutsy perseverance won new respect for MMA among boxing fans, and no doubt there will be more mash-ups between the disciplines in superfights to come. But whether Mayweather, whose record of 50 fights undefeated now outstrips Rocky Marciano’s, can be offered a big enough purse to come out of retirement for the third time, remains to be seen.