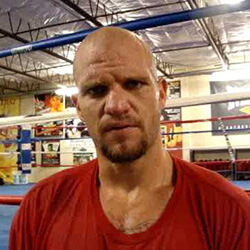 The fight will also be headlining a card that has been promoted by Eddie Hearn’s Matchroom Boxing, and will be taking place at the Casino de Monte-Carlo, which will be the third edition of the Monte-Carlo boxing Bonanza.

Wilson, 35, recently increased his record to 19-0 after eight knockouts when he won the judge’s decision at the Jackson Country Expo, beating Mexican Mario Aguilar. Russia’s Lebedev is currently 31-2 with 23 knockouts on his record.

Wilson, who was recently flanked by Joe and Jimmy Pedrojetti at the Chadwicks Pub and Sports Bar, spoke about the upcoming fight as well as his career before he signed the new contract to take on Lebedev. He explained that the fight was the “Super Bowl of Boxing” for him and his team. Joe Pedrojetti described that Wilson had more than 200 amateur fights under his belt, and has won two national championships, and was a three-time Olympic alternate when he was younger.

The trainer team is also on the lookout for left-handed sparring partners within the California area, hoping to find a seasoned opponent for Wilson to hone his skills, as he gets ready for the Monaco match.