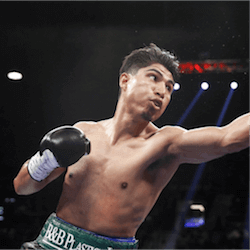 There is plenty of proper boxing this weekend to distract Australian punters from the ludicrous circus around the Mayweather-McGregor mash-up next month, including an important bout for Carl Frampton and Andres Gutierrez in Belfast on Saturday night. However, a fight that is also attracting a lot of betting action is Saturday’s Mikey Garcia v Adrien Broner super-lightweight bout, taking place at the Barclays Center in Brooklyn, New York.

Tale of the Tape Says Garcia

The two fighters are exactly matched in height, at 170cm each, but Broner has a seven-centimetre reach advantage. He’s also likely to be the heavier boxer on Saturday: reports indicate that he’s having trouble getting down the agreed weight limit of 63.6kg, or 140 pounds. If he does enter the ring overweight, he’s going to pay a hefty penalty.

Both fight in orthodox stance, and both have had 36 professional fights. Garcia can claim the better record, however. The Californian is undefeated, winning 30 of those victories by knockout. Broner, on the other hand, has lost two bouts and had one declared no contest, leaving him with 33 wins, 24 of them by knockout.

Broner Capable of an Upset

Based on his record, as well as his brutal third-round knockout of Montenegrin Dejan Zlaticanin to win the WBC lightweight title in January, Garcia is the odds-on favourite at most online betting sites to win on Saturday. Punters stand to win $0.25-$0.33 on him if he is victorious.

For punters who prefer riskier odds, Broner might be a better bet at $2.40-$3.00. Whatever the two boxers’ records say, he’s never going to be a pushover, and if his quieter, less flamboyant approach to recent press conferences is any indication, he is taking this fight very seriously. He certainly has the skill and the experience to give Garcia a shock.