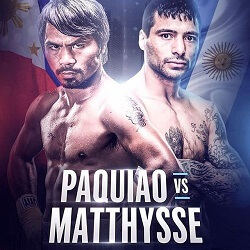 Arnold Vegafria, Business Head for MP Promotions has told reporters and fans that the highly anticipated match between Manny Pacquiao and Lucas Matthysse is still set to happen. The fight will see Welterweight World Champions titleholder Matthysse defend against eight division world champion Pacquiao, who is seeking to dethrone Matthyse.

The fight will take place in mid July at the Axiata Arena in Kuala Lumpur, Malaysia. Vegafria told reporters that all plans are going as scheduled, and that the fight is still very much on.

This has come after news surfaced that the match might be cancelled. Dan Rafael, a Senior Boxing Writer, explained that MP Promotions had missed a series of financial deadlines that had put the match in risk of being cancelled.

The article also went on to mention Bob Arum, chairman for Top Rank Promotions, allegedly looking for a new match between Matthysse and WBC Welterweight champion Terence Crawford. The article led many fans to believe that there was a real chance that the Pacquiao vs Matthyse fight would be put on hold or completely cancelled.

But Vegafria assures fans that the fight is still underway, and that both fighters have been training hard in anticipation. It was also reported that MP Promotions has teamed up with ABS-CBN and Sky Cable to bring the fight to international television. It’s very likely that Rafael’s article was unfounded, and was nothing more than allegations put forth by the writer.