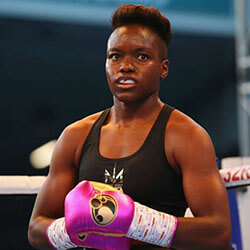 Nicola Adams has told reporters that she believes the only way to keep her face-base growing is with a straight knockout win, which she hopes to achieve in her upcoming back with Millan.

Adams (4-0) will be facing her first major test professionally when she comes up against Mexican Isabel Millan (22-4-1) for the currently vacant Interim WBO female Flyweight title. The match is set take place at Leicester’s Morningside Arena.

Adams’ last three opponents, Soledad Macedo, Soledad del Valle Frias, and Maryan Salazar have all been knocked out within the first three rounds, and Adams hopes to keep that going in her fight with Millan. The double Olympic gold-medallist has explained that she’s happy to have the reputation of a puncher, and that she wants it continue throughout her career. She added that her fans want to watch entertaining fights, and that she wants to continue delivering knockouts to keep them happy.

If Adams wins against Millan, her promoter Frank Warren explains that he is confident in putting the 35-year-old boxer in front of WBO champion Arely Mucino, where she’d have to defend her title against Adams in Britain.

But Adams has insisted that she won’t be happy with her career until she’s beaten out all flyweight division champions beside Mucina, which includes Leonela Paola Yudica (IBF), Ibeth Zamora Silva (WBC), and Naoko Fujioka (WBA). Part of her reason is to inspire more British women to get in to boxing on a professional level.