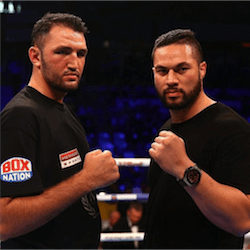 There is a surprisingly low level of excitement in the media and among sports betting fans online over Saturday’s Joseph Parker v Hughie Fury fight in Manchester. Perhaps the recent parade of ‘super-fights’ and the non-stop barrage of publicity that accompanied them simply wore boxing enthusiasts down; the lower their expectations, the less they can be disappointed.

Ironically, Aussie punters probably should be paying a bit more attention to the clash, as it could turn out to be one of the more intense boxing matches of the year. It is, after all, for the WBO heavyweight world championship; a title Parker will be defending, while Fury fights to bring the belt back into his family.

His more famous cousin, Tyson Fury, held the title, along with the IBO and WBA (Unified) belts, until he was hit by an anti-doping investigation in 2016, while simultaneously battling depression. He relinquished all his titles voluntarily in October, although it was reported that this was a preventative move to avoid being stripped of them.

Parker won the vacant title by beating the USA’s Andy Ruiz Jr in a contentious split decision, with many contending that Ruiz had been the better boxer in more rounds. Parker was supposed to defend the title a number of times this year, but a combination of industry horse-trading and injury put paid to each proposed bout.

In his only title defence to date, against Romania’s Razvan Kojanu in Auckland in May, Parker’s technique looked as lacklustre as it did during the Ruiz fight, despite his unanimous points win. As for Fury, on-going health problems and other issues have kept him out of the ring since April 2016. It’s questionable whether he’ll be completely ring ready on Saturday night.

That said, even if neither boxer is at his best, they’re evenly matched enough to promise a tough fight. They’re both undefeated, with Parker taking 18 KOs in 23 fights and Fury managing 10 KOs in 20, so they have similar levels of experience.

Parker has a better KO record, but Fury has a slight height and reach advantage on the New Zealander, and he’s also two years younger than the 25-year-old. Betting sites reckon it will be close: Parker is odds-on at around $0.70, but Fury is hardly a long shot, at around $1.10.