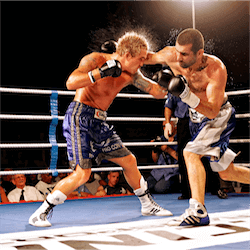 Western Australian boxing fans will need to be up and awake by 3am on Sunday to catch the WBA super-middleweight title bout in Germany, and it’s a 5am call on the east coast. Later in the day, they have the WBO PPV light-heavyweight fight starts in Las Vegas, Nevada, to look forward to.

The German fight, scheduled for 9pm local time in the Rittal Arena in Wetzlar, a city in the central state of Hesse, is for the WBA super-middleweight crown, currently held by 25-year-old German Tyron Zeuge (20-0-1, 11 KOs). The challenger is 34-year-old Englishman Paul Smith (38-6, 22 KOs), and it will be the first time he fights the young champion.

Smith has admitted that this is probably his last chance to grab a world title. He’s come close twice before, but lost both his WBO title bouts against Arthur Abraham, also fought in Germany, on painful points decisions. The Liverpudlian was particularly unhappy with the result in the first fight, believing he won the bout on points, so he enters the ring on Saturday night determined to become a world champion at last.

Zeuge became the WBA super-middleweight champ on 5 November last year, four months after he and Italy’s Giovanni De Carolis had battled doggedly to the only draw in the undefeated German’s career to date. He won November’s rematch in Potsdam with a spectacular knockout in the final round, and has defended his title once since then.

The HBO PPV fight between Andre Ward and Sergey ‘Krusher’ Kovalev at the Mandalay Bay Events Center in Vegas also starts at 9pm local time on Saturday night: Sunday 10am in Perth, and noon in Sydney. It’s a rematch for the two light-heavyweights, whose first fight in November 2016 was unbelievably close.

Kovalev (30-1-1, 26 KOs) is 34, a year older than his American opponent. Ward (31-0, 15 KOs) won their first meeting via a razor-thin points decision, with many observers feeling the Russian actually finished on top. It’s certainly Kovalev’s opinion, and he is hungry to prove his superiority once and for all on Saturday night, telling reporters that he has no option but to end Ward’s boxing career.

Ward isn’t phased by the pre-fight threats, although he is as aware as Kovalev is that fans will want a clear result this time. If he can get in close and stay there, the Russian will be in trouble, as Ward packs much more power in his short punches.