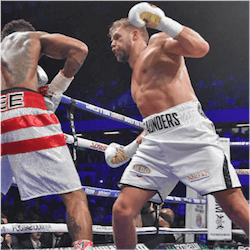 British boxer Billy Joe Saunders was odds-on, at $0.40 and less, to successfully defend his WBO middleweight title in London on Saturday night against American Willie Monroe Jr, and the bout played out as the online betting sites had predicted. After 12 rounds, Saunders was declared the winner on points by all three judges, with scores of 115-114, 117-111, and 117-112. BLH also scored the fight in Saunders’ favour: 115-113.

The win means that Saunders, now undefeated in 25 fights with 12 KOs, hangs onto the WBO Middleweight belt. That will leave fans of the Englishman chuffed, but for boxing enthusiasts in general, the clash proved somewhat disappointing.

Bear in mind that this bout was only Saunders’ second defence of his title since he claimed it with his December 2015 victory over Andy Lee, so Australian punters would have been hoping for more fireworks. Two title defences announced in 2016 were later cancelled, one due to a hand injury Saunders sustained in training, and there was also much hype around a fight scheduled against Avtandil Khurtsidze in July. That one fell through after the Georgian was arrested for alleged racketeering.

In his one title defence so far, in December last year against WBO European middleweight champion Artur Akavov, Saunders was looking rusty, despite winning the bout. Boxing aficionados may be feeling similarly cheated by Saturday’s fight at the Copper Box Arena, which never really came to life, despite Saunders’ physical superiority throughout. A rally by Monroe in the final rounds raised the temperature somewhat, but it was too little, too late.

Unification Fight Not on the Cards Yet

Having retained his WBO title, Saunders will now be keen to fight Gennady Golovkin, to unify the Kazakhstani’s IBO, IBF, WBC and WBA (Super) middleweight titles with Saunders’ WBO belt.

However, that fight might take a while to set up, after Golovkin’s own unification bout, against Mexico’s Ring magazine and lineal title-holder Canelo Alvarez on Saturday, ended in a disappointing draw.

So punters can probably expect a Golovkin-Alvarez rematch before Saunders gets a crack at a unification fight.